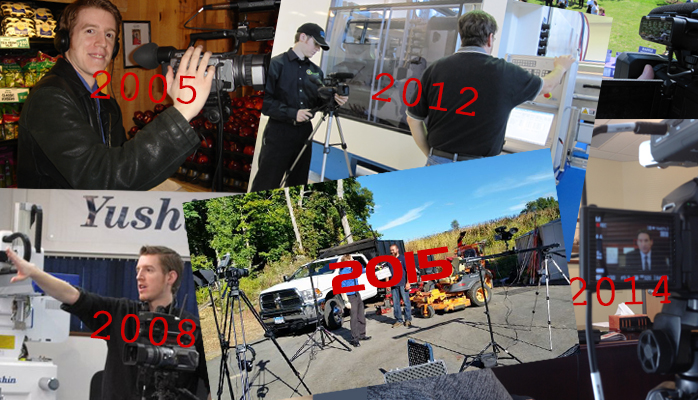 A Special Thank You: 1 DECADE in Business

This month marks 10 years of being in business.

It started with an email to the CEO of the grocery store I was working for back in December of 2005. I had just gotten married 2 months prior and had purchased my first “professional” video camera with the majority of the money we received as gifts from the wedding: a Sony VX2100. I told Stew Leonard that I was going to school for Media Arts at Western Connecticut State University, and I shoot video. I also said that the mozzarella video he had playing on a loop in his stores wasn’t up to the level of quality his brand is known for, and I could do it better.

Long story short, I reshot that mozzarella video for free to show him what I could do, and Stew Leonard’s quickly became my biggest client for the next few years as I grew (and that video, in fact, is still looping in all of the stores!).

Since then, I have quit my 9-5 job, traveled the country filming for clients, built up a small army of freelance talent that I call upon when needed, and most recently expanded into a full digital agency.

As I write this in my office, with my old VX2100 sitting on the shelf next to me, long retired, I am filled with gratitude for those first clients of mine who saw potential when I had nothing to show, and am humbled by the repeat and referral business that has been sent my way over the past decade. I could not be where I am if it wasn’t for you, and I’m beyond thrilled to continue the journey as Empire Studios carries on it’s upward trajectory. Big things are planned for the months and years ahead – I can’t wait to show them to you.

Thank you very, very much.