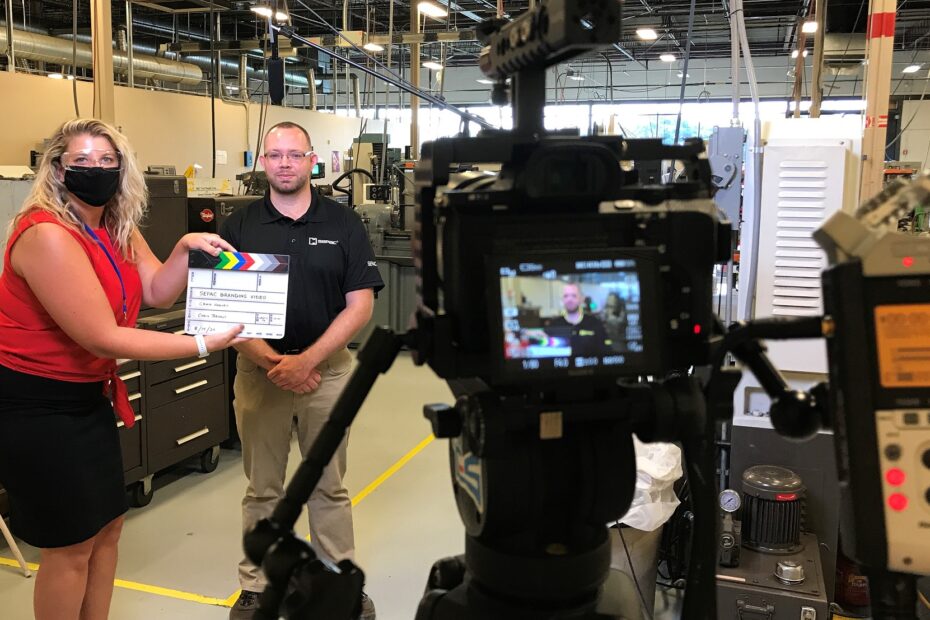 It’s filming day! What can I expect?

If you’ve never had a video professionally filmed at your business before, you might have some questions as to what you can expect on the day. While every crew and each project is different, here is a pretty good guideline for how things are likely to go down.

I’ll be using terminology relating to a manufacturing facility, but it’s a very similar process across most industries. With that said, let’s jump in.

If you’re working with an experienced crew, pre-production has already been taken care of, so a plan in already in place. I’m not going to go into pre-production here – that’s the (important!) topic of a whole other post.

Generally speaking, crew arrival is in the morning, right around when people are getting in to work. depending on the complexity of the shoot, one to three crew members are typical. This number can certainly be more for a larger scale production.

During interviews, it’s best to have the least amount of people possible in the room or area where it’s taking place.

The day starts off with a walkthrough of the facility by the crew. We’re looking for places to conduct interviews (if applicable), checking sound levels for those interviews, and getting ideas for shotsn general. We also strategize the timing of what’s happening during the day, to ensure we capture everything (since some things can have limited windows of time, like a specific process that on this day is only happening for 45 minutes).

If filming interviews, it’s best to do those first (assuming there are no time-sensitive items during this time). We like to capture these earlier in the day because people are fresher, having recently becomed caffinated. We are also well aware that many people don’t really look forward to speaking on camera, so by scheduling it earlier in the day, it’s out of the way sooner. Another benefit of conducting the interviews earlier is that  we get to listen to what they say, which can help determine new b-roll shots we might not have otherwise thought of.

During interviews, it’s best to have the least amount of people possible in the room or area where it’s taking place. There’s no need to get the interviewee unnecessarily nervous! It doesn’t help that people like taking behind-the-scenes photos during this part of the process (since it does tend to look pretty cool, and is a big departure from a normal work day), so the less paparazzi the better for the person on camera.

For us, we prefer to shoot these in typical interviewee/interviewer style. The subject is being asked questions by an off-screen interviewer, who they’re looking at and speaking to. This usually lasts 10-15 minutes, and multiple takes can be done if needed and/or requested.

Interviews can be conducted in one location or throughout the facility, depending on the project and the day’s timing.

Once interviews are wrapped, we will capture the needed b-roll to best tell the story.

Depending on the weather, we will pilot a drone to get some amazing aerial shots of the location (if drone video was part of the project, and if allowed by FAA regulations for the area).

Around this time we will usually break for lunch. Afterwards, any remaining shots from around the facility that haven’t been checked off the shot list will be captured.

Lastly we will pack up our equipment, say adios, and hit the road.

Depending on the scale and complexity of the project, a first cut will be sent out in 2-4 weeks. An accurate timeframe is provided beforehand, so you’re never left wondering where things are.

I hope this helped you, and answered any questions or reservations you had regarding filming at your company. If there was anything not covered here that you’d like to know about, just drop me a line at Chris@EmpireStudiosNYC.com, or on Twitter at @The_ChrisBryant.