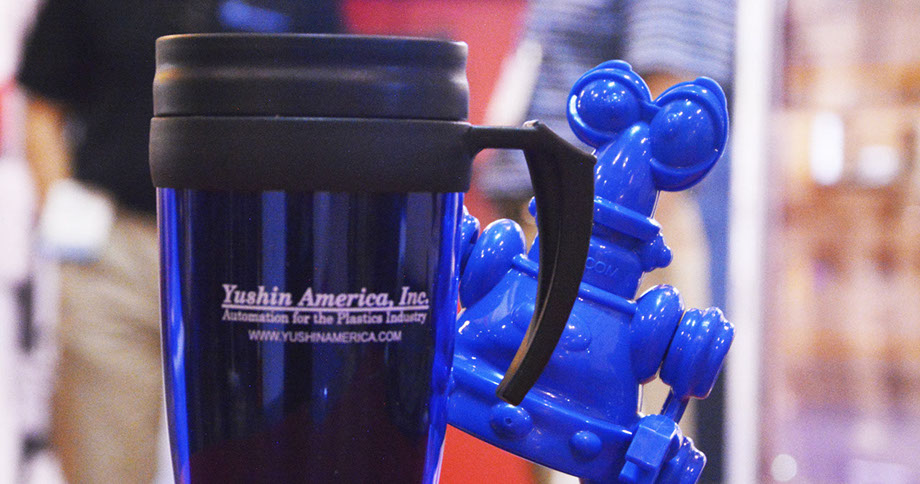 Importance of Outside The Box Marketing

Every once in a while, a client gives us total free reign to create whatever content we want, as long as it’s engaging for their audience. Yushin America — a major robotics company — gave it to us, and we gave them the fan favorite “Eddie the Robot” character.

Good things can happen when thinking outside the box, and a client who gets that is always a lot of fun to work with.

The spring of 2012 was unbearably hot in Orlando, especially when you were shoveling snow only a few days prior in the northeast. The National Plastics Exposition (NPE) is the definitive trade show for the plastics industry, and one of the largest by square footage in the Western Hemisphere.

The Orange County Convention Center’s West Hall is massive. My client was excitedly telling me you could lie the Empire State Building on its side in the building, and it would fit with room to spare. It was 3 days before the show officially opened to the public, and the entire building was abuzz with carpenters building, programmers tweaking, and forklift drivers hauling. Oh, the forklifts. There were signs all over warning you to watch for them, since THEY have the right of way.  It’s pretty serious.

As the Yushin booth came into view, I finally got a sense of the massive scale of it. It was one of the larger booths at the show, with an open concept that allowed for entrance to it from any of the four sides.

They had several large demonstrations, and most created an actual product that an attendee could watch form right before their eyes. Easily the most impressive was a setup that built a toy robot. The machine pulled red raw plastic pellets into a mold, and quickly super heated them into liquid and into specific forms. A few seconds later when it cooled back into a solid, Yushin’s robot reached into the molding machine to take out the parts, and then placed each piece carefully onto an assembly table. There, the Yushin robot then snapped the robot together: the front and back of the main body, the head and the arms and legs. When the toy robot was placed into the conveyor belt, it was a fully adjustable red little robot. Everyone at Yushin knew this was going to be a huge hit, as did I. There was simply nothing like this at the show.

I had already formed a list of videos I would be creating, but this toy robot sparked an out-of-the-box, silly idea. Why not make it into a character, and film him “running” around the show? I checked with my client before I invested the time, and they told me to go for it. I grabbed a toy robot, some tape and a cardboard stick, then headed out.  I wasn’t taking it too seriously, and in fact wanted the audience to see the stick that was taped to the robot and my hand moving it. Since I didn’t have the time to do it very seriously with VFX or green screen, allowing people to see the puppeteer (as it were), it would be like a wink to the audience, letting them know that I was aware this was silly.

I filmed the segment in about 45 minutes, and edited it together that night, along with several other pieces of content for the show. When I showed my client, he got a laugh out of it and gave the final thumbs up to post it. It went on to be the most talked-about video I had produced for Yushin at the show, but I didn’t know how big of an impact it had until I returned to the next NPE in 2015.

So fast forward three years, and I’m back at the Orange County Convention Center filming for Yushin at the next NPE. I was shooting some of the Yushin machines that were in use by other companies throughout the expo, and a group of people saw me with the camera and the Yushin logo on my shirt and exhibitor badge that hung around my neck.

“Hey, you’re with Yushin! Are you going to do another toy robot video? The last one was so funny!”

I was surprised and humbled that they remembered the video from three years ago. I told them I wasn’t planning to, but it was a possibility. I then informed them that the toy was blue this year, and — I’m serious — they dropped what they were doing and bolted in the direction of the Yushin booth. I’m telling you, these things were a huge hit.

Within the next hour, two more people asked me the same question, and I realized I needed to get another one done. I told my client about the audience demand, and I got an immediate green light to make one right away. I ran around the show and shot the video, making sure I was a little more obvious than before with my arm showing in the shots, moving the robot. I knew there was an opportunity here, and named the robot “Eddie.” No reason… It was short, easy to spell and sounded cute. The client also approved that, and I began a campaign to promote Eddie (Empire Studios was also running their social media accounts for the show). It included photos of him interacting with the giveaways that were planned, shots of him around the booth and — of course — his big “reveal” video. No one knew Yushin was bringing back the toy robot, and the video started off showing it being built, only giving slight hints at what it was. Suddenly, you see the Yushin machine lifting up the toy and placing it on the conveyor belt. I expect there were many smiles as they realized the toy robot was back. From there, Eddie comes to life and looks at the camera before jumping off the belt and starting his run around the show.

It was another big hit, and I had the pleasure of seeing several people watch the video for the first time. They were intrigued when I wanted them to be, then excited and laughing. That kind of engagement is one of my favorite parts of what I do.

Good things can happen when thinking outside the box, and a client who gets that is always a lot of fun to work with.

I hope Yushin plans to bring back Eddie for NPE 2018, but only time will tell.