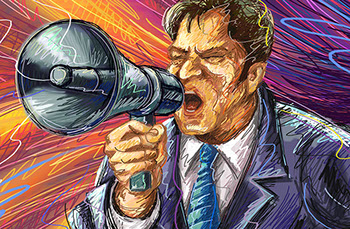 “Your Brand SUCKS!” – What To Do When Things Go South on Social

It’s crossed the mind of any small business owner or CEO: “What if someone says something negative about my brand on social media?”

Let me clear things up for you.  If you’re a B2C business, it’s not IF but WHEN this happens (This doesn’t mean B2B businesses are immune, but it’s far less common than when you’re marketing towards the population at large).

The comment could be a disgruntled customer, a misinformed busybody (yes, I said “busybody”… I’m bringing it back) or even a competitor using shady or questionable tactics.  It could be in the form of a tweet, a Facebook post or an unflattering Instagram photo.  It may be a legitimate gripe or comment, or just someone who’s a troll and wants to cause a scene.  Just keep in mind that negative sentiment is bound to happen sooner or later, and it’s best to prepare for it beforehand (but discussing how a Social Crisis Strategy is set up is a topic for a whole other article).

So you’re in the weeds right now, and need to clean things up.  I’ll start from worst-case scenario and work my way down from there (since the bigger the issue is, the more that reader wants to just GET TO IT!):

Your company is directly involved with the injury or death of someone (told you I’m starting with the worst case).

It goes without saying that this situation is horrible, but I am addressing this solely from the accused/guilty/non guilty company’s perspective.

If you haven’t already, you need to have an emergency meeting with the CEO, president and rest of the C-level and head of Marketing immediately.  It’s 2:30am?  Tell them to grab a strong cup of coffee – it’s going to be a rough night.  They will need to consult with legal counsel right away to determine next steps, while Marketing does damage control.  In many cases, death or injury is operator error – until confirmed details emerge, you need to respond by at least stating the company is aware and is looking into it.  Also state that more information will be out as soon as possible.  Don’t admit fault (your attorney will advise you of the same) and keep it general.  Any verbiage at this time needs to be run by the highest level of the organization before it’s posted.  This would also be a good time to find an agency to help deal with this PR nightmare.  A good agency can advise on the critical next steps from a PR point of view, what to say and what NOT to say.  Plan out a careful strategy for the hours, days and weeks ahead with the agency and Marketing Department, with close communication with the CEO throughout the process.

Someone gets sick after consuming your product.  The best course of action would be to empathize with the person and ask for them to send you a direct message.  This allows for the situation to be resolved on a personal, non-public, one-on-one basis.  It shows the person you care and take the matter seriously, while minimizing the negative chatter since you’ve taken the conversation private.  Once you’re speaking directly and privately, resolve it as you would any customer who were to bring up a complaint (tactfully, fairly and completely).

A customer had a bad experience with your product/service.  It happens.  No matter how great your products or services, there will come a time when you just didn’t hit it out of the park for someone.  Empathize with the customer, and offer to put them in touch with a customer service representative or technician.  You could also elect to take the conversation off line, similar to the above scenario.

A troll is… trolling.  For those of you not up on the lingo, a “troll” is a person who says mean or spiteful remarks in the hopes of getting a reaction out of people.  First, determine if you are, in fact, dealing with a troll and not just a really harsh, upset customer.

If it’s something very over the top and mean spirited, chances are good it’s a troll.  Feel free to ignore them.  If it’s particularly offensive (in a hate-speech, curse word kind of way… no in a he-hurt-my-feelings kind of way), report and/or block the person.  You don’t want to start a dialogue with them – that’s what they’re after.  There’s a saying: “Don’t feed the trolls.”  Just don’t.  It won’t end well for you or your brand.

I hope these quick tips helped you in whatever situation you might be in, or you may be preparing for.  Just be sure to respond with a level head, and be hyper-aware that anything you say can be seen by millions of people.  Ensure you stay true to your brand’s voice and values, and make sure your customers are always taken care of and you’ll be fine.